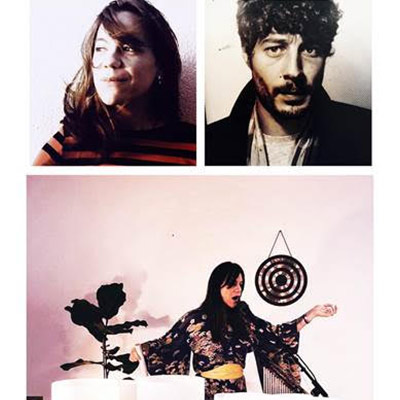 Maïa Ibar (b.1982) and Tristan Martineau (b. 1984) were both born in France and hold degrees in Communications and Visual Arts, respectively. They now live in Biarritz, a French Basque city long associated with its healing waters, independent identity and in recent times with the G7 political summit. It is in this culturally and energetically charged port that they co-founded Pioche Projects —a multi-functional arts and healing space in the city’s bohemian district—in 2014.

At this unique public facility a core group of artists (including Ibar and Martineau) occupy working studios from which a gamut of creative output emerges.

Ibar’s studio work focuses on painting (in which she holds a master’s degree from the New York Studio School), songwriting (including ongoing music projects with her brother Baptiste Ibar called Dual Split and Lighter with Camilla Padgitt-Coles + Boshra AlSaadi) and performance.

Martineau works largely with photography, videography, collage, and design (in which he holds a degree in visual communications from ECV). He has a distinctive perspective and intricate compositions informed by the loss of one eye in childhood.

It is in the spacious central hall of this complex that Ibar and Martineau first started hosting public Sound Baths, after both intensively studying the techniques and traditions that inform this specific holistic therapy for several years. Ibar’s healing practice stems from her vast and multifaceted knowledge of music/shamanism which led her to the deep study of sound therapy ten years ago. Maïa first started working in sound therapy in Brooklyn, NY at Golden Drum and has been working with shaman/aromatherapist Maya Minwah and energy healer Jill Leigh for many years.

Martineau has focused much of his study on the ancient Japanese art of Jin Shin Jyutsu, (in which he holds a certificate) that uses light touch over key areas of the body to balance and restore harmony in energetic flow.

In 2013, they co-created International Integrators with Dr. Kathryn Hayward and other colleagues, and have offered their tailored form of immersive healing at numerous international retreats, while continuing to give monthly Sound Baths in Biarritz, which have been received with great enthusiasm by the local community.