Redesigning Health Education and Nurturing Professionals in Health And Healing

Have you ever wished that your doctor, nurse and other health care practitioners had a better bedside manner?

Dr. Bill Manahan and Dr. Adam Rindfleisch are co-founders of International Integrators and Living Whole, along with Dr. Kathryn Hayward and other colleagues. These three doctors have known one another for decades, each working within the conventional medicine system in the US to bring a more Whole Health approach to the systems within which they worked: Bill in Minneapolis, MN, Adam in Madison, WI and Kathryn in Boston, MA.

As three old friends and colleagues, Bill, Adam and Kathryn bring to this podcast some of the themes they have talked about for years as they work toward improving future health education and care for budding doctors, nurses and everyone interested in health and healing.

Here are some of the themes that will engage you as you listen to their conversation:

The nurses began practicing healing touch. It is probably the reason that Energy Practices have gotten the status that they have, more than anything else, when suddenly tens of thousands of nurses were doing healing touch, and people who had problems for a really long time suddenly were better.

We’re exploring how medical education looks in the future. I think there is a lot of room to do some reframing.
Adam Rindfleisch, MD 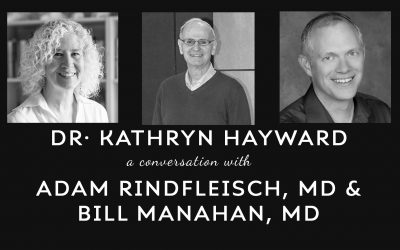